The Origin: Do you deserve a pony?

Whenever people learn that I have a pony, they immediately want to start regaling me with stories about evil ponies. Pretty much I tune them out because their stories reflect poorly upon themselves, not on ponies. Ponies are the salt of the earth and it’s few that can understand, let alone, love them for what they truly are.

Let’s return to Hempflings, What Horses Reveal because here is a man who understands ponies. Pandora is clearly The Origin (p. 92):

He is a freedom-loving, independent, unyielding, difficult to influence, living deeply in his world, a stranger to civilization. That which appears to be stubbornness is in truth the expression of independent existence…much nobler in his nature then he appears to be. He is mostly very intelligent, assertive, agile and nimble, talented, and honest.

Pandora was purchased from an Internet ad, sight unseen, and we traveled across the state for an 8 hour round trip (for her it was 12 hours) to pick her up. I think she was happy to leave her former life as she readily hopped onto our trailer at the truck stop during a cloudy day that was spitting rain. This was my first pony, and Pandora had to get busy teaching me!

When husband was first trying to communicate with the horses, we visited the barn only to find one of the kittens missing. This was worrisome as a kitten had been killed earlier that week by a car. Since Pandora’s drylot paddock was located right next to the barn, I asked husband to ask her about the kitten:

Pandora: “The Humans took it away.”

Husband: “Are you sure?”

Pandora: “Why did you ask me if you weren’t going to believe me? Don’t talk to me.”

Pandora was completely correct as the BO and his kids had picked up the kitten the day before to re-home it. For two years Pandora refused to talk with husband, and refused any energy treatments. Only the night she had her first colic, which caused her so much pain, did she agree to let him back into her world.

Horses of this type are often set aside for children, which is a gross error with possibly grave consequences…Origin horses like these are way too uncompromising…

The person for the Origin should be very wise, very open and thoroughly mature. He should neither be under any illusions about the horse, nor let himself be guided by sentimentality. He should be stable, sensitive, very fair and striving for righteousness… The Origin belongs to the high-ranking character types that demand and expect the most from mankind.

When I was still teaching, I held a groundwork clinic using all my available horses, including Pandora. The clinic centered around using leading techniques through obstacle courses and covered some basics of roundpen work. Pandora and a student gave me an interesting situation that has stuck with me all these years.

Tackless lead in the big arena

Pandora’s assigned “human” was a grown adult woman with college kids. She was constantly at the beck and call of her husband and children (once received 5 phone calls from her family during an hour lesson) and clearly didn’t know how to set boundaries. Before I met her she had already gone through two horses that were totally unsuitable. Since she was such a nice person this confused me until the clinic.

While working with another student, Pandora’s handler called for me. She couldn’t get Pandora to cross a groundpole. Pandora stood there looking at me with an expression like, “Boy, do I have her number!” and I told the student she HAD TO GET PANDORA OVER THE POLE…how was she going to do it? Figure it out.

A few moments passed while the student looked at Pandora – pony, at 38 inches tall – stared back. The student started laughing and threw her arms out: “But she’s so cute! I can’t make her!”

She never did get Pandora to cross that pole.

Another one of my favorite pony stories is how she moved up in the herd. She started with the weakest link, made friends, then moved upwards, taking her time to make friends until she got to the alpha. A month after her introduction to the herd, she made her move, declared the round hay bales all her property and then kicked the shit out of the large 12 hand pony who had been alpha. She remained the ruler for a year until too many larger ponies were added to the herd.

She takes no prisoners. Her confidence in herself is unshakeable. She is smarter and wiser then any horse I’ve owned or known. I count myself lucky to be her friend and caretaker.

Yet Pandora also has a very mothering nature too. She once told us she wanted her own personal pony but I had no plans on breeding her (I was told she had two foals before). Once we were able to move her into a pony herd, I could tell she was far more happy. 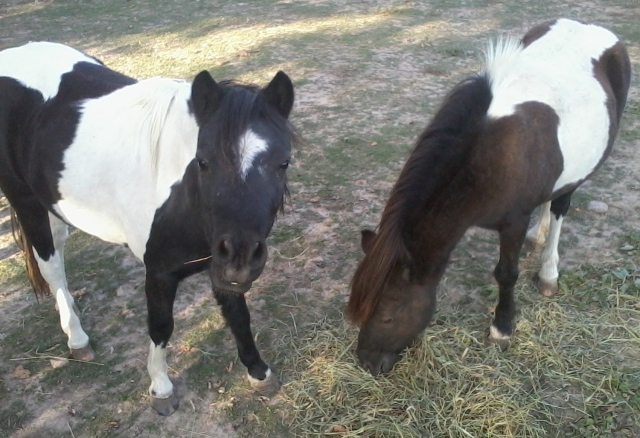 Today, she is mothering two younger mini’s who need her guidance. I know she is very content in her lodgings in MO but I miss her… and her indominitable nature.

Important Disclaimer!! Use of quoted material from Klaus Hempflings’ book What Horses Reveal is based upon fair copyright use. The 1961 Report of the Register of Copyrights on the General Revision of the U.S. Copyright Law cites examples of activities that courts have regarded as fair use: “quotation of excerpts in a review or criticism for purposes of illustration or comment; quotation of short passages in a scholarly or technical work, for illustration or clarification of the author’s observations…

I am not a KFH student and my comments etc… upon the work is to be taken as my sole responsibility. For further clarification you need to seek out Hempfling himself through his website, books, videos or clinics.

4 Responses to The Origin: Do you deserve a pony?