This is in reply to Julians (White Horse Pilgrim) comments on a previous blog entry… It’s too large a concept to cover in one post so I’ll spread it out over several.

For the last four days it has done nothing but rain here. T-Town is sitting under a huge bowl of storm clouds that are refusing to budge. It makes my head pound while I try to grapple with what I have discovered about Z. Seeking wisdom, I return to Hempflings, What Horses Reveal, a book that has historically been extremely frustrating to me, yet I see it now from a different perspective as if it was previously in a foreign language.

Hempfling may give conformation information on identifying his “types” which could be construed as a formula but what he is really detailing (IMO) is a Horse Personality that invokes a chain of inter-related values we unconsciously recognize. In order to know ourselves we must grasp how the horse reflects our inner nature. That is why he keeps stressing that his method is intuitive, and that you have to present yourself honestly to the horse, in order to gain the lesson.

I recently wrote somewhat about my pony, Pandora. You can read that post as a cute story about an adorable pony (the shadows in the cave) or you can peel back the onion (see what is casting the shadow). For many, the shadows are enough to give them pleasure and that’s cool. When we start working with horses, riding a horse who responds to our requests is often enough to bring us joy. We are all not in the same place in our path of discovery. 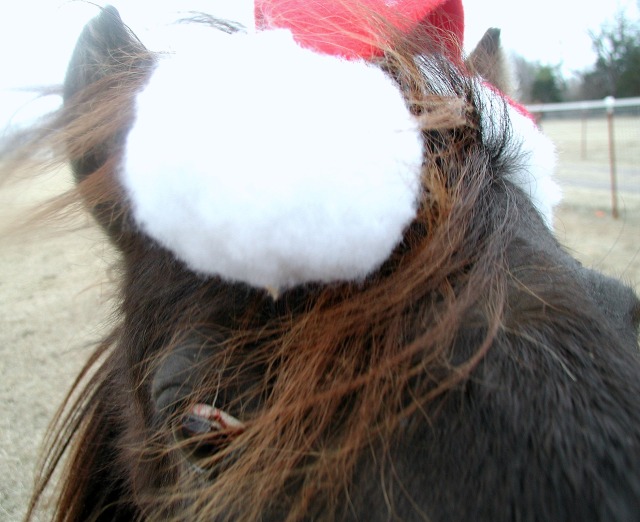 At one point you may realize there is something deeper going on, something concealed and hard to understand that few seem to know about. And the pursuit of this knowledge becomes more important to you then gaining just an obedient animal through applying certain tools. This is the path that veers off into the woods, where brambles swhack you in the face, and your new shoes step down into a bog hole. Beyond though, through the tribulations, is something Shining.

In discussing this with husband via Skype this is what he says about Pandora in a way that is so much better then how I can phrase it, so I’ll steal it and put it here:

The Origin is not a real, physical horse; but it is a distilled essense of a real aspect of some horses psyches in an archetypal form. Being an archetypal form, an evokative image, it can sink down into our minds and become part of the vocabulary that we can use to understand the complex world.

I suspect that is why you cannot just read his book (What Horses Reveal) like a cookbook, and suddenly understand horses.  These are complex, subtle archetypes that you have to slowly absorb and incorporate into your own subconcious; then they can become intutitive tools to help you understand.

The subconcious is much better than our waking mind at bringing together lots of complex and conflicting info from many sources, and distilling wisdom and insight from it.

Damn, those men are clever! Husband and Hempfling. And Tricksy too!

Pony as the Trickster (Coyote and Puca) ~ Pony is not interested in YOUR journey, she is interested in her own doings. You are incidental to her plans, although she may find you amusing as something to play with. Her mind may be incomprehensible to ours and her motivations doubly so, yet in the end, they somehow teach us the lesson we needed, when we needed it.

The Puca of Irish-Welsh-Scottish folklore often takes the shape of a horse, preferably black. It invites a traveler upon it’s back, taking it away from the established path and then the wild ride begins. Meanwhile, the Kelpie, often black, invites you upon it’s back and then dives into a river or lake to drown you. Let me take the allegory one step further – water – and drowning – is often a symbol of death and a stage of the spiritual re-birth. Though in the Kelpies’ case since he ate the humans, excepting heart and liver, I’m not sure we can apply a re-birth allegory….

If you didn’t leave out a bowl of milk / carrots, pony is the type that would learn how to unlatch the gate, kick open the barn door to raid the bin or trash your garden.

Pony as Sage ~ If pony is a Sage, then she is a Zen one. Let me finish this post with some stories that make me smile and think of Pandora:

During the civil wars in feudal Japan, an invading army would quickly sweep into a town and take control. In one particular village, everyone fled just before the army arrived – everyone except the Zen master. Curious about this old fellow, the general went to the temple to see for himself what kind of man this master was. When he wasn’t treated with the deference and submissiveness to which he was accustomed, the general burst into anger.

“You fool,” he shouted as he reached for his sword, “don’t you realize you are standing before a man who could run you through without blinking an eye!” But despite the threat, the master seemed unmoved.

“And do you realize,” the master replied calmly, “that you are standing before a man who can be run through without blinking an eye?”

A university professor went to visit a famous Zen master. While the master quietly served tea, the professor talked about Zen. The master poured the visitor’s cup to the brim, and then kept pouring. The professor watched the overflowing cup until he could no longer restrain himself.

“It’s overfull! No more will go in!” the professor blurted. “You are like this cup,” the master replied, “How can I show you Zen unless you first empty your cup.”

For more Zen stories, and insight into Pony’s mind, check out this website.