Brena ~ The Minister is a honest, forthright confidant

In the last post, I attributed Brena with the profile of The Modest One – a horse type that is often overlooked because of their outward, good nature, but who has inner depths. Looking at her head profile, face on, and in three quarter, another personality emerges: The Minister.

The Minister is a horse that always wants to challenge and be challenged. He learns extraordinarily quickly and is only too ready to take on and master these new challenges….

The Minister is a wise horse and he seeks wisdom in human beings, and ultimately, the Minister can only accept a fine, high-ranking person of strong character.

The longer, slender shape of her head becomes more evident and the hallmark of this type is the sloping nose (noticeable in the above photo). Other attributes such as a smaller mouth and eye, with the slight dip in the otherwise straight profile, indicate the presence of The Minister.

As mentioned in the previous post, Brena’s back is slightly long and the hindquarters with a bit of weakness. These body traits are also found in The Minister. It means care needs to be taken in the training to prevent injury as work is increased.

The angle and length of the neck into the shoulder may also denote she could be stiff in sideways flexion. Care should be taken that this doesn’t become resistance: circles and figure 8’s should be large arcs and sharp turns avoided. 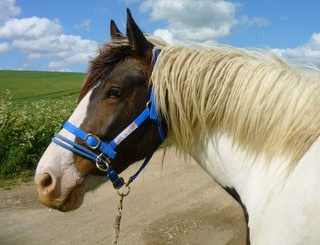 In many, if not all, of Brena’s photos her long forelock covers her eyes and we see them as if through a veil. Naturally, this could be completely aside from her physical and mental abilities – just a beautiful, thick forelock. However, it’s interesting that both the Modest One and the Minister are personalities that retreat within and often hide their true selves from undiscerning folk. Sometimes form does follow function. 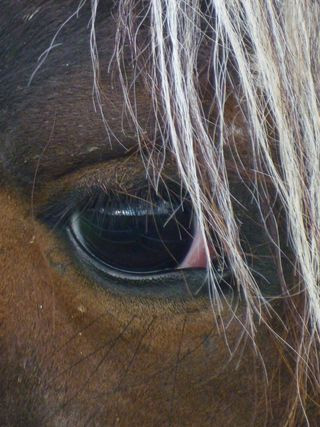 A childs’ genuine down-to-earth atttitude and agility make it surprisingly easy for him to approach this horse. The Minister loves children because they are so much more like him then adults.

The playful honesty and enjoyment of the world by children is what the Minister is all about. I would suspect that Brena has a little mischief in her that probably comes out by “playing dumb” – for those who just see the surface attributes she is the solid, grounded, rather placid horse they expect; for the person, willing to look deeper and approach with an open freshness, you might discover she has a quiet sense of mature humor that would never be mean spirited.

If the Minister feels that he can encounter a person on the same plane  then he will be the first to tear down every barrier between human and horse. Overall, he is the most open type of all horses but he is also the one who can quickly hide himself, or even entrench himself behind a wall of feigned ignorance; he will pretend not to understand.

This is a horse you turn too for advice and who always gives wise counsel.  However, he is also a horse that if you are not equal to him, will retreat (“talk to the hand”) and ignore you. Treated unfairly or not given the mental stimulus he needs, may become extremely and surprisingly aggressive.

Putting it all together, Brena is a great, solid companion and true friend. Her Modest personality dominates while The Minister personality promises a bit more quirkiness.

She has strength and stamina, as well as a healthy form that will lead to few longterm problems as long as she is worked with awareness of her hindquarters and back. I would add some stretching exercises for her neck, shoulder and front forelegs. The back legs need consistent and progressive strengthening through hill work (which Julian already does). Providing her half halts or transition changes (i.e. walk-trot-walk, trot from halt, canter to trot etc…) to re-balance weight on her hindquarters periodically on the ride would also be helpful.

I also think that her Minister personality could use some occasional challenges – not too much to overface the Modest part, but enough that she doesn’t grow bored or complacent. She is more clever then she initially appears so don’t let that Modest face fool you into letting her get away with less.

I think this is a horse that the more you delve into yourself, will provide even more back. She has hidden depths, as indicated by both her Modest and Minister aspects, and often conceals her inner nature. She needs to be approached with the openness and joy of a child and encouraged to express herself. 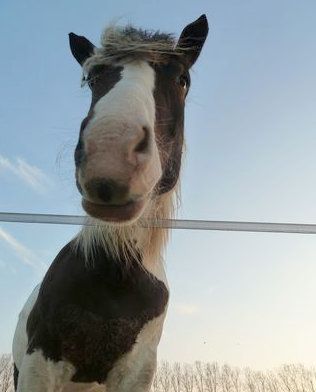 Disclaimer: I am interpreting from the book What Horses Reveal. I don’t know if I’ve hit the type right on the head as I’m experimenting with this. Hempfling can look at a horse and say this horse is Blah-Blah. I have to rely more heavily on intuition and what I know about the horse so please excuse my errors.

Important Disclaimer!! Use of quoted material from Klaus Hempflings’ book What Horses Reveal is based upon fair copyright use. The 1961 Report of the Register of Copyrights on the General Revision of the U.S. Copyright Law cites examples of activities that courts have regarded as fair use: “quotation of excerpts in a review or criticism for purposes of illustration or comment; quotation of short passages in a scholarly or technical work, for illustration or clarification of the author’s observations…

I am not a KFH student and my comments etc… upon the work is to be taken as my sole responsibility. For further clarification you need to seek out Hempfling himself through his website, books, videos or clinics.

9 Responses to Brena ~ The Minister is a honest, forthright confidant