The Visitors have a Past and an Owner

Posted on September 10, 2012 by horseideology

I’m back home to Oklahoma. It’s late and I’m pretty tired. However, a quick update on the Horse Situation. First, let’s get some perspective of where I live in Missouri – it’s the Sticks, the Back of Beyond and some other more rude adjectives.

When I’m in Oklahoma I live here…

And when I’m in Missouri, I live here… 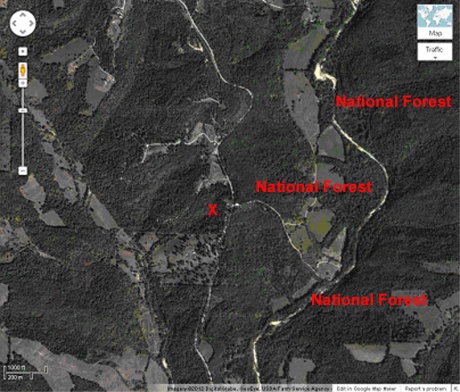 If I was in Oklahoma, and a starving dog was roaming the neighborhood, I could call Animal Control and have it removed – probably placed in a shelter where it would be destroyed in five days when not adopted. I could post signs in the neighborhood, or take the dog in and care for it myself. If I saw an animal being mistreated, I could contact animal control and have it investigated. Being in city limits, I would have access to the police and animal control, as well as laws that would govern animal welfare and specifically PETS.

Now, in both Oklahoma and Missouri, horses are considered LIVESTOCK, not pets. If the horse was located outside the city limits, the jurisdiction would be the Sheriff, which is an elected position. Being a former reporter who has worked with the police and sheriff departments, my experience is that generally a sheriff’s department doesn’t give you the same response as the police. You will get less action on your request. They focus on drug traffic, theft, domestic violence (only after someone gets harmed) and murder.

Oklahoma has been a drought state for the last three summers, and I think it’s been longer. Missouri is now experiencing their first real drought and it’s more intense than the Oldsters have seen. The entire area of Texas, Oklahoma, Kansas, Arkansas and Missouri have been hit hard. Hay prices are skyrocketing. Horses are being shipped off to Mexico for slaughter at an obscenely low price (slaughter buyers pay by the pound and I think an an average horse is bought for  less then $100).

On my 45 minute drive to town, I probably pass at least 50 horses located on little farmettes. While these horses are lean, they are also very muscular and none are in the condition you are about to see on this blog post. I also drive by at least 200 cattle and again, none of them are in this condition, despite the economy and the drought. There are plenty of good apples out there caring for their animals and there are a couple of real bastards (as you will see).

Our property is surrounded by one family clan – we will call them the Masons. I was afraid these horses were owned by them because if they were it would hurt our relationship. We had met the 70 year old plus Patriarch and formed a neighborly connection which being in the country is essential for survival.

Yesterday, husband walked over to discuss the horses with the Mr. Mason’s daughter (he lives with her and her family).  The good news is that the horses are NOT owned by the Masons. The good news is that the Masons are disgusted with the real owner who they think is trash. The bad news is the horses are owned by a Meth-head who lives in the backwoods behind our place. The Meth addict’s brother is our north neighborhood. The Meth addict routinely starves her horses and they flee her – often making their way to the National Forest in desperation.

Unfortunately, horses aren’t like kittens or puppies. This addict will think her starved horses are “worth something” and probably show up demanding them back or wanting money for them. I don’t have enough room or money to support them long term and I’m sure as heck not paying some sort of robbery-price for basically horses the Meat Man would turn away!

At this time we are considering our options. One is to involve the Sheriff -w ho probably won’t give a rat’s ass about the issue but who is most likely (if I know my cops) knows this person very very well. Involving the law, most likely will mean retaliation from the druggies. Depending on the culture of the area, this could be as intense as burning our house down or killing our horses. We must be realistic about this.

Another idea is to attempt diplomacy and act the fool. Try to get the person to relinquish ownership (which would need to be in writing) and do a soft sell about how “hard the economy is and we know it’s tough” without letting on we know that she’s just a drug-addled bitch.

And perhaps…  the solution is for the horses to simply disappear….

First up is the Bay Gelding – Bayard. He showed up first and got an extra day of feed. He was significantly more alert Day Two and has begun to show he is a dominant minded horse. I suspect he has more training than the second horse as he stepped backwards upon a voice command. He’s a big guy – at least 15.2 hands and has a nice reach, as well as a pretty guy. His forehead slightly bulges so that could mean something on the stubborn side – too soon too tell. 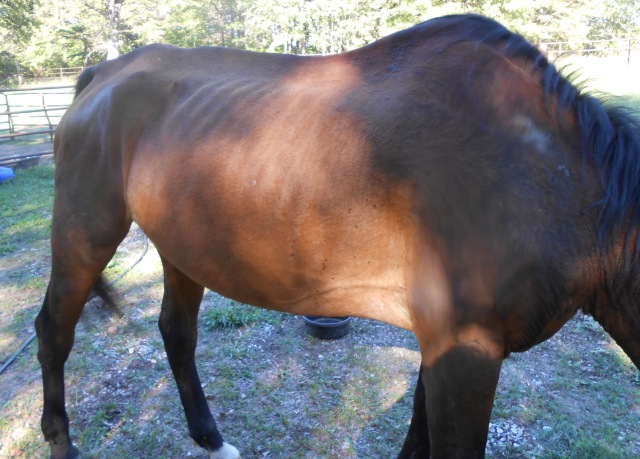 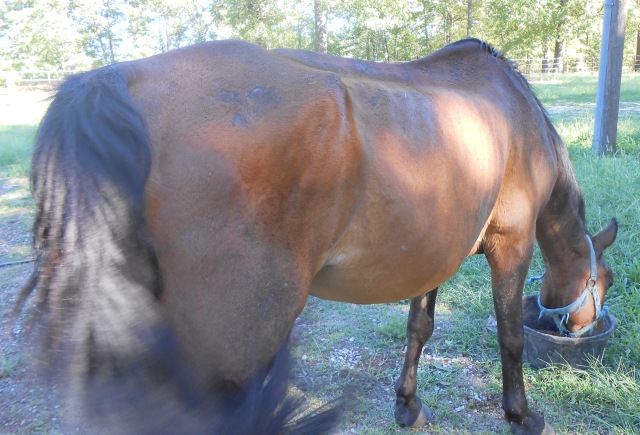 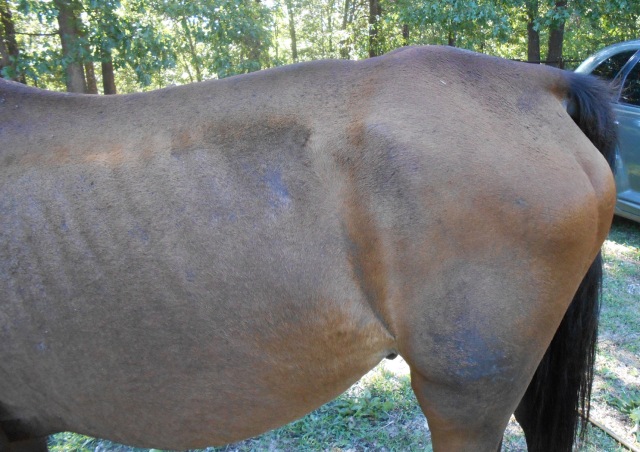 The good news is on Bayard is that in 3 days with triple portions of Equine Senior feed and unlimited grass with fresh water he has actually gained weight. Second day, Bayard trotted to the shake of the feed bucket but still can’t quite stand people. I think he would be an athletic horse (when in shape) but might test the owner so he needs a home with a horse-experienced person.

The second horse, is a Chestnut mare (Chessie). I suspect some Arab-Quarter horse. She desires company, is curious about people and I think would make a great youth horse to a young teen who knew a little something. She really has a loving, want to get along, nature. 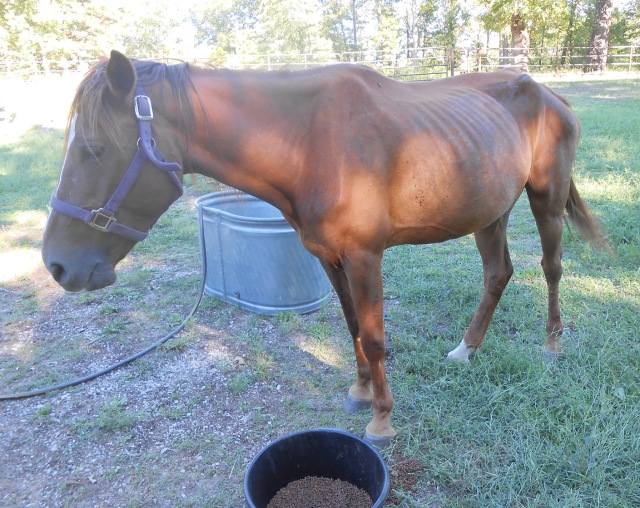 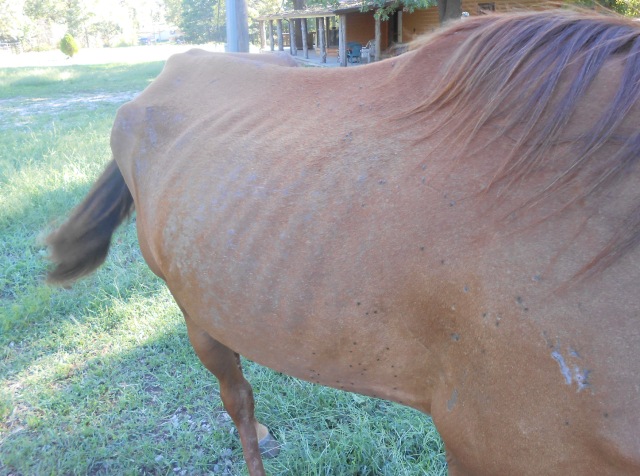 Chessie isn’t gaining weight as fast as Bayard but she seems to be a steady, if not slow, eater so hopefully improvement will be noticed within the week. She has a narrow chest and is a bit cow-hocked. I don’t think she has a sport horse career in front of her, but her loving nature would make up for a lot.

Neither of these horses are spooky – they take the roadside traffic fine and I had my electric sander going within four feet of them. However, neither horse knew anything about fly spray and when the rain downpour happened they both stood out in it, and ignored the stall.

Well, I don’t know what will happen. At this point we are just going to feed them and try to get as much weight as we can on them. Hopefully, with husband’s diplomacy we can get something worked out with the owner -maybe she’ll need some drug money and jump at the chance to sell for little money. If that happens, we will feed up and re-home – I don’t need more project horses!

For obvious reasons this post will go private within a day or so….

2 Responses to The Visitors have a Past and an Owner