Turning the Key in the Lock, Dante improves

Posted on August 1, 2016 by rebeccadante

Friday evening had cooled off so I returned with hubby and started the next stage  of Dante’s training: Would Dante follow a new target? Oh yes, he would! After one click, he latched on to the new target and would walk with head down and low, reaching towards it. YAY! 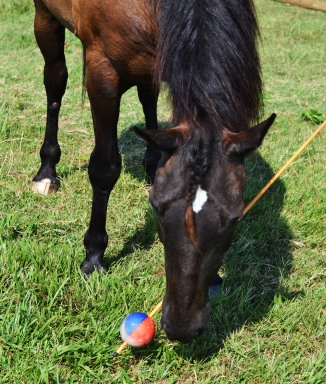 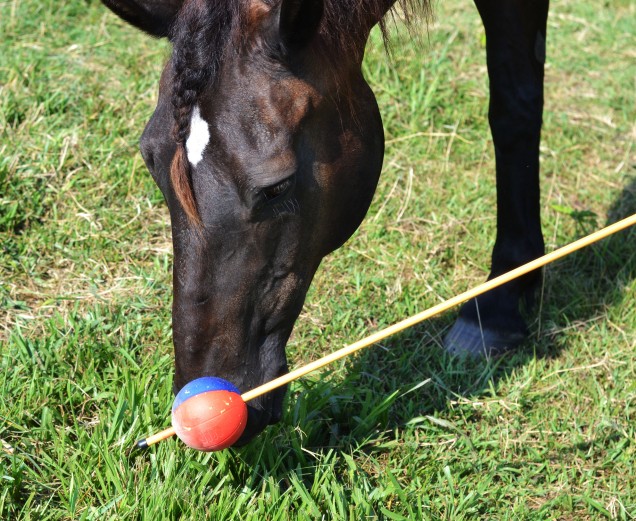 It also seemed to me that his hindquarters was moving more freely. He has been on ALCAR (the correct dosage) for 7 days and after viewing the video of him trotting away, I think two things: 1.) he is moving more freely then he ever has since he came to me; 2.) he seems sore on the right hindleg still (which is the leg he injured right before shipping to me); and 3.) he looks like he is landing with toe first on the hindlegs which may indicate some other lameness or soreness issues.

Saturday we went out again and he was eager and we did it all without a halter/leadrope in the pasture. I was able to get a small trot from him, long and low too! YAY! Sunday was more of the same, this time with hubby doing the first bit of work so I could videotape.

My intuition tells me this is the direction to go with him right now – Liberty Work with Clicker Training – maybe some Linda Tellington-Jones groundwork with only using the halter and leadrope for necessary chores (farrier work, chiropractor massage work etc…).

One reason Liberty work can become so addictive is getting this type of connection. I feel he is interested and motivated – and even though he left to go back to the feed tub at the run in shed, he only spent a few moments before he re-thought and decided to come back to me in the pasture.

I also think the changes in diet are working. It seemed to me his energy level was up – not having that glazed, dull look in his eye of last week; and it seemed he was moving a bit better in the hindquarters with his back toes dragging significantly less. It may be my imagination (or maybe he is getting too fat) but the roach on his back seemed smaller too!

When I did the Masterson Method on him, focusing on the hindquarters he released a LOT on the right hind (the injured one), especially at the Stifle and Hip points. We noticed that his left fore had thrush (the right fore did not) which again, in my experience with Tristan’s many lameness issues, the diagonal legs often show a connection, in Dante’s case the Right Hind + Left Fore.

I’m finally getting the improvements. I had hoped to be riding by now but the reality is it’s too hot anyway. So the plan is more of this: diet, dental on Friday to remove the cracked molar, and exercise to strengthen the body.