Posted on August 4, 2016 by rebeccadante

A little cooler and some cloud cover made it far more bearable to be out there at the barn. Dante did great! He loved following the target and was so eager, rather like a cat chasing a laser light! I had to ask him to calm down some by doing halt and square work in between.

Added in some curves and arcs to his walk and trot. He wanted to trot a lot more and chase that target!  I was also very careful to switch sides so he could be worked evenly. 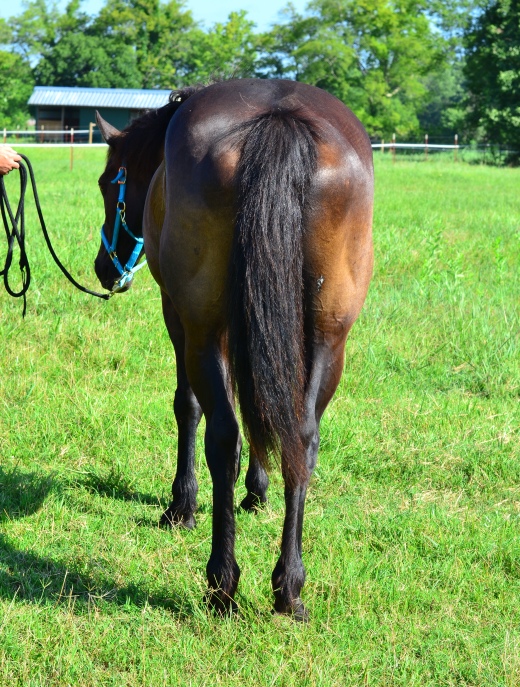 In studying Dante, I believe he is a left bended (right handed) horse. The left bended horse has contracted tight muscles on the left so he will find it hard to lengthen the left; conversely the right side will be easier to lengthen but harder to contract.

In the field at liberty, he chooses to go my right hand to have his left side near me and is slower to follow the target or to move with his right side to me.

He bends easier to the left when doing his stretches because his right side (non-dominant) stretches easily. Versus harder to bend his nose to the right because that means the left side – the contracted, tightly muscled dominant side – would have to stretch.

He finds it easier to go on a counter clockwise circle, traveling with the left as the inside because this circle direction naturally contracts the left (dominant) and stretches the right (non-dominant). This circle he is willing to make bigger.

When asked to go to the right (clockwise) was when he bucked and got resistant. Part of this may be because of his right hind leg injury (going to the right means the right hind carries the most supporting weight of the turn) so it might change when he is completely healed – although I don’t think so.

The clockwise circle demands that his hard to stretch side (the left) is on the outside of the circle with the non-dominant side, the right, on the inside. This is an obviously harder circle for him which he makes smaller.

When you work your horse and spend time with him, these are the observations to write down in order to start decoding what is happening with your horse and focuses the direction of the training.